After the wild success of the first workshop, it was time to make another one. Location and team remained the same: Marius and me had a room in Krikragaa HQ (in Pilies dirbtuves, Klaipeda) at our disposal. This time we have focused more on manufacturing process and simplified the circuit complexity as much as possible. Components: coin battery and flashing RGB LED. Skills taught: PCB preparation. Goal: make a flashing badge.

Trivial circuit complexity gave people a way to think more about possible ways to achieve the goal and unleash their creativity.

We were making PCBs from single or double sided FR-4 fiberglass by drawing connections with a permanent marker and etching in Iron chloride – FeCl3 (I had to bring a bottle from Prague since this chemical doesn’t seem to be super popular in Lithuania). Necessary holes were drilled using a cheap micro drill. Battery holder was constructed using a trusty paperclip. During the whole process nobody got poisoned, corroded, burned and just a single drilling bit got broken. 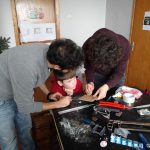 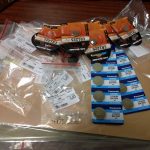 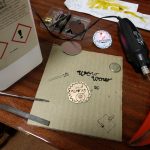 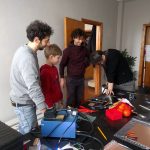