A few weeks ago I had the opportunity to organize an electronics workshop in Klaipeda with help of my friend Marius and people from the Krikragaa. The workshop was a part of christmas events – market and workshops.

The goal of the workshop (apart from having fun) was to build a simple flashing circuit with six LEDs. To fit into the christmas mood better, LEDs were usually embedded into custom decorated cardboard christmas tree. Since the whole idea was to teach a little bit of electronics to kids and absolute beginners, the circuit was chosen to be:

The final circuit was built on laboratory pre-drilled PCB without traces. That makes it quite messy and hard to solder. One of my ideas was to build the circuit on a breadboard and let anyone try to fiddle with components. However this did not work out, because just understanding how a breadboard works would take people some time. All the wires make even a simple circuit look complicated. A better approach for the next time might be to make a large (cardboard?) version of the circuit with cirtuit diagram drawn on top and possibility to swap components in place. The question is if anyone would be interested in that, since the absolutely most popular part of the workshop was soldering, not fiddling with some components.

Anyway, everything worked out in pretty well in the end and instead of disbanding the workshop at 15:00 we managed to leave just shortly after midnight. And some of the works turned out to be really nice! 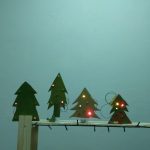 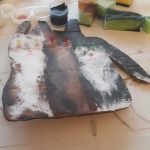 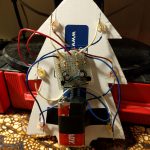 Looking forward to next time!